The Key to Sales Performance

This was effectively demonstrated in a study done in the highly competitive pharmaceutical industry. Development of sales versatility skills had a significant impact on a key strategic driver-product market share. When compared to salespeople who did not receive versatility skills training, the versatile salespeople's market share was significantly higher, and continued to improve every month of the year long study.

Helping salespeople learn how to recognise their customers' preferences and styles, and, to adapt their sales strategy to more directly meet those preferences, has proven to be the key to sales performance.

What is Sales Versatility?

There are two things almost all salespeople know:

When people say they "connect" with someone, they are referring to the similarity of their communication preferences and styles. We feel more comfortable with people who like to talk at the same pace we do; who are not too pushy or too pliable; who want to get to know about us at about the same time we are ready to share that kind of information.

Because each style represents about 25% of all customers (most salespeople only share Social Styles with one out of every four customers), a majority of their sales will tend to come from those customers. But what if salespeople could learn to "connect" with the other 75% of their customers? Would they be able to sell more effectively to those customers as well?

These were the key questions asked by Wilson Learning and a large U.S.-based pharmaceutical company. This study shows that by teaching salespeople their preferred style of communicating, how to recognise the styles of their customers, and, most importantly, how to adapt their style, salespeople connect with a broader base of customers and their performance goes up.

The first step was to determine what performance to measure. To prove the impact of versatility skills on the company, a strategically important performance metric was needed. Not just a change in perception or attitude, but a real bottom-line outcome.

We selected a region of 40 salespeople to test our ideas. This was a group of already highly successful salespeople. In order to prove that sales versatility was the cause of an improvement in market share, we divided this group into two subgroups:

Improving sales versatility would not have much value if performance improved for only a few months and then diminished. This is the fate of many training programmes-once the initial "shot" wears off, the improvement goes away. So, for this study we collected the market share performance data not just for three months following the training, but for a full nine months following the training.

There were two groups of salespeople; one was given sales versatility training, the other was not. Market share information for two key product lines was collected just before training and then for each of the next three quarters (nine months) after the training.

Without the normal control and the long-term performance data, there are a number of things that could have explained the performance increase. So, by studying sales versatility in this way, we now have proof that the versatility skills were the cause of any increase in market share. 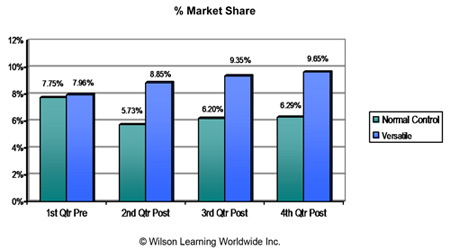 Results of this study provide convincing evidence that versatility skills caused a significant increase in market share. The graph at right summarises the market share changes and can be used to answer a number of questions.

Were the groups really equal to start?

Did performance improve after versatility training?

Was the performance improvement sustained over time?

Market share continued to climb for the versatile salespeople across all nine months of the study. After the 11% improvement in the first quarter, market share in the second quarter was up more than 17% from the pre-training period, and up 21% in the third quarter.

What is a 53% improvement in market share worth to your organisation?

As described at the beginning of this article, because of the large market for these products, this kind of improvement was worth a great deal. We cannot tell you exactly as it might expose proprietary information. This is against a cost of two days of training for each salesperson and manager.

Put in another way, if an organisation with 6.29% market share has 1,000 customers, each purchasing $1,000 in product, Then each one percent increase in market share is worth $158,982. So an improvement from a 6.29% market share to a 9.65% market share (or 3.36%) is equal to $534,179 in increased revenue. Of course, your results will depend upon your current market, market share and customer revenue. But, for this pharmaceutical firm, creating versatile salespeople was a highly profitable return on investment.

And the ROI did not end there. Performance continued to increase over the entire time we tracked it, and most likely well beyond. Thus, this is a sustained improvement. As salespeople apply their versatility skills, they perform better and better. So one year, two years or more after training, sales versatility is still increasing your company's performance and profitability.

Please complete this form to download Versatility | The Key to Sales Performance.

Please complete this form to download Versatility | The Key to Sales Performance.