In many industries, it is a given that salespeople need business consultant skills to be effective. However, little has been done to try to define the level of consultant skills required. Some consider strategic-level discovery skills the definition of consultant skill. For others, understanding core operational strategy is required, and for others, the ability to conduct an executive-level sales call is the heart of being a consultative salesperson.

A study undertaken by Wilson Learning was an attempt to define different levels of sales and consultant skills and determine the relative business impact of providing these skills to salespeople. Salespeople in a large telecommunications company were divided into three groups; some received only basic sales training, some received initial consulting skills training and the final group received advanced consulting skills training. The results showed that:

The results provide strong support for the value of different levels of business consulting skills and the ability of an effective training process to transfer learning to job performance. By knowing their customers as a business and by understanding their customers' success factors and processes, salespeople can position their offering in a way that links to their customers' vision and strategy and, as a result, sell more.

A quick look at the literature on sales training shows many definitions for the term "consultant skills." For some, being a consultant means having the ability to uncover the customer's needs and expectations before presenting a solution, rather than just presenting features and benefits in hopes that the customer will respond. For others, sales consultant skills mean that salespeople have an in-depth knowledge of business processes and can hold their own in strategic discussions with CEOs and CFOs.

Such was the dilemma of a large telecommunications organisation. They sold voice and data telecommunications services to other large organisations—a highly complex product in a highly competitive market. Their salespeople needed consultant skills, but having the right level of skills was critical to their success. Therefore, Wilson Learning partnered with this organisation to study the relative impact of three levels of consultant skills on sales performance.

For the purpose of the study, we defined levels of sales/consultant skills and provided different groups of salespeople with training for each of the levels:

As a result, we had three groups of salespeople, two with differing levels of consulting skills. We expected that, because of the complexity of the company's products and the strategic nature of the business relationship with their clients, the Level 1 consulting skills would benefit the salespeople, but that Level 2 skills were really required for high performance. Therefore, our expectation was that the group with Level 1 Consultant Skills would perform better than those with Basic Sales Skills, and that the salespeople with Level 2 Consultant Skills would perform the best of the three groups.

In total, 128 salespeople in a large telecommunications company took part in this study—approximately 40 salespeople in each of the three groups above. All of the salespeople represented the same types of products and called on the same types of customers. In addition, these groups were matched on a variety of performance characteristics prior to training to ensure that any differences after training could be attributed to their differing consulting skills, not to other factors.

To prove the impact of consulting skills on the company, a strategically important performance measure was needed—not just a change in perception or attitude, but a real bottom-line outcome. Therefore, for this study we measured the percent of the sales target achieved. The implementation of the training coincided with the organisation's fiscal year, so each salesperson started the study at zero and measures were taken every three months (each quarter).

Improving consulting skills would not have much value if performance improved for only a few months and then diminished. Therefore, for this study we collected the performance data not just for three months following the training, but over a full 12-month period. The data was grouped by fiscal quarters and represented the following periods associated with the study.

By measuring performance in this way we accomplished two things. First, we have a before-training baseline to ensure that all three groups of salespeople were performing at the same level. Second, we have up to nine months of data after the training. This should be enough to demonstrate that the results are sustainable over the long term. 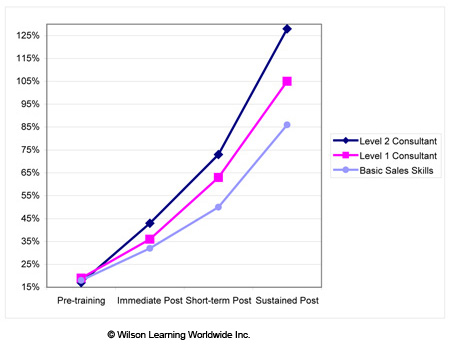 Results of this study provide convincing evidence that the consulting skills had a significant impact on performance. The graph at right shows the percentage of target achieved for all four quarters for the three groups of salespeople.

All three groups had similar performance during the first three months before training began, as shown by the Pre-training baseline period in the graph. Thus, the groups were about equal at the beginning—differences after that could be largely attributed to the training.

By the third quarter, four to six months after the training, the three groups were distinctly different. The Basic Sales Skills group had achieved about 50% of their target for the year. While year-to-year comparisons are difficult to make, this was ahead of the previous year's performance, possibly due to the new sales skills.

By the fourth, and final, quarter of the study, the value and impact of consultant skills is clearly evident. The Basic Sales Skills group achieved about 86% of their initial target. This was not uncommon for this organisation, which at that time typically set initial sales targets high relative to the previous year's performance. Targets were viewed more as "stretch goals" for salespeople, and 75–85% of target achieved by the end of the year was typical.

The results show that, for this organisation, the Level 2 (advanced) consultant skills had the greatest and most sustained impact on sales performance. With just the Level 1 (consulting process) skills, sales performance was greater than the Basic Sales Skills group, but the level of improvement was relatively flat after the 3rd quarter (short-term post-training period).

The results suggest that the consulting process skills gave the salespeople a greater ability to discover clients' needs at a deeper level. They were also better able to apply the consultative process to more effectively guide clients to a decision and an implementation of the solution. However, the value of these skills levelled off relatively quickly; the Level 1 salespeople lacked the advanced skills needed to understand their clients' strategic needs and bring solutions that address their critical success factors.

In contrast, the salespeople with the advanced consultant skills had skills to analyse their clients' underlying business objectives and bring solutions to the table that address strategic operational goals of the organisation. Further, they were able to bring their analysis of the client's strategic needs to the CEO and CFO, enhancing their credibility with executives by addressing their needs and expectations. As a result, the advanced consultant skills allowed their performance to continue to accelerate throughout the entire 12-month period. In fact, the trajectory of the performance curve suggests that their performance continued to climb well beyond the 12 months of this study.

Please complete this form to download Determining the Consultant Skills Required of Salespeople.

Please complete this form to download Determining the Consultant Skills Required of Salespeople.