Is Your Organisation Ready to Go Global?

5 Cultural Dimensions that Must Be Managed to Ensure Global Effectiveness

The most critical global developments for businesses include the increase in economic activity in emerging markets, the free flow of information across the globe, and increasingly global labour markets.

"Overall 100% of the managers agreed, and 29% strongly agreed that global effectiveness training made them more effective in their job."

The implications are clear: To grow and flourish in a global economy requires building strong business relationships across international boundaries. "Like it or not," one expert points out, "knowledge of the world is no longer a luxury." According to a McKinsey survey of executives around the world, the most important strategies for capturing growth include building a local presence, developing partnerships and joint ventures with local businesses as well as recruiting talent from emerging markets. Local businesses must compete with companies around the world, whose leaders may be far more knowledgeable about our culture than our leaders are about theirs.

For some years now, local companies and corporations have been acquiring businesses based overseas, establishing local branches in other countries and assembling virtual teams to work across international boundaries. Even so, too many businesses are still unprepared to work with customers and co-workers from different cultures. The most common problems—misunderstandings and communication breakdowns—have a significant impact in terms of lowered productivity, lost sales and unsuccessful product launches. "Effective cross-cultural skills are critical," according to the global programme manager for a large telecommunications manufacturer. "We are a global organisation. We have clients around the world requiring global support and many cross-cultural project teams. If we can improve the global effectiveness skills of our team leaders and members, this will have tremendous impact on our bottom line."

What Can the Organisation Do?

To build global competitiveness, local companies need to recognise the special challenges of doing business globally and step up efforts to ensure employees acquire global awareness and cross-cultural communication skills. This means raising consciousness about the differences that create discomfort and confusion. This is critical, since the most common problems are caused by norms and behaviours that seem so natural to us that they are effectively out of our awareness.

To become more adept at communicating across cultures, people need to become comfortable with the nature of differences. Then they need skills that enable them to communicate and relate effectively.

The 5 Cultural Dimensions That Make the Biggest Difference 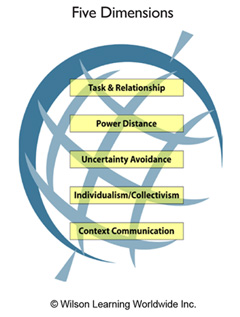 People can gain insights into other cultures by understanding five key dimensions where cultural differences are likely to be the most profound and where knowledge can have the biggest effect in reducing culture shock.

One of the most noticeable differences between cultures has to do with how people approach the development of relationships. Some cultures can be characterised as more task/achievement oriented, while others are more relationship oriented. Westerners, and Americans in particular, tend to be more task/achievement oriented, with a shorter-term focus that creates a sense of urgency about getting things done and moving forward. In this view, "time is money," a commodity that can be "saved" or "wasted." In a typical meeting, the task comes first. Socialising can come after the meeting. In contrast, relationship-oriented cultures will organise activities and priorities around the people involved, rather than around the clock. In a relationship-oriented culture, people are not driven by time. They would see themselves as flexible—the person, rather than the task, dictates the event. Social aspects come first, as a prerequisite to task achievement.

Even at the level of individual meetings and appointments, relationships can be affected by these different perspectives. For example, most Westerners take punctuality as a sign of respect for the other person's time. Yet in a relationship culture, starting some time later than the formally stated hour is the norm and arriving early or even "on time" might appear pushy, too impatient, or even inconsiderate. This difference in the "unwritten rules" can undermine the mutual trust and respect on which effective business relationships are founded.

This dimension has to do with the extent to which individuals in the society accept power inequality based on each person's place in a hierarchy. This dimension influences degrees of autonomy and decision-making processes. Historically, American culture leans toward egalitarianism, favouring less distance between those at the top of a hierarchical structure and those at the bottom. American traditions abound with stories of the ordinary employee speaking "truth to power." In other cultures, deference to authority is expected and it would be considered presumptuous and even shocking to offer an independent opinion or to contradict a superior.

With the assumption of team member equality and shared responsibility, some Western cultures may find it mystifying when team members from another culture fail to offer opinions or share information. Their counterparts, on the other hand, may feel very uncomfortable when dealing with a company that values participatory leadership. If they are placed in a team made up of people with perceived differences in rank, it would seem inappropriate to put their opinions forward, while Westerners may appear in their eyes to be disrespectful of hierarchical boundaries and prerogatives.

Cultures also vary considerably in terms of their tolerance for risk and uncertainty. Business people from a culture that is high in uncertainty avoidance will prefer to operate within a narrower sphere bounded by rules and constraints designed to reduce risk. People from a culture that avoids uncertainty may feel very uncomfortable in unstructured situations. They may be reluctant to take action and will want to be reassured by clear rules and safety measures that reduce risk.

When people from an uncertainty avoiding culture meet people more accustomed to higher levels of uncertainty, friction can ensue. One group may perceive the other as hidebound or too timid, while the other is perceived as reckless and too willing to take unacceptable chances. Awareness of this deeply ingrained difference could allow improved communication and accommodation to meet the needs of both parties.

What happens when workers from a highly individualistic culture interact with colleagues from more collectivist cultures? Americans, in particular, see the individual as loosely connected to the larger group—whether family, business organisations or social groups. In other societies (as we have learned in a long history of doing business in Asia, for example), individuals are considered to be tightly connected to the larger social and business organisations.

These differences can generate misunderstandings and frustration when it comes time to make business decisions. Collectivist groups will be reluctant to directly address conflict or differences of opinion, and are most comfortable with consensus decision making. Westerners, on the other hand, will be more at ease with independent opinions and decisions. They may find that decisions they thought were final are still up in the air, while other groups may feel they are being pressured or bulldozed into a decision before they have reached the consensus they feel is needed.

The final dimension of culture concerns what is referred to as "context communication." People in Western business organisations tend to prefer linear, direct communication that "nets it out." In other cultures, the norm is to be more indirect, draw inferences and present information in a more metaphorical fashion.

In the West we might expect to send an email, get a response and consider the transaction to be complete. If working with people from a high-context culture, that email might be all right in certain situations for conveying information, but will be completely ineffective for building relationships or resolving conflicts. An email sent for such purposes might not even receive a reply, possibly creating more conflict.

As profound as these kinds of differences are, they often go unrecognised. Unlike spoken language, they stem from deeply held beliefs and values, and the "rules of engagement" are unarticulated even by those within the cultural group. By raising these differences to the level of conscious awareness, people can change behaviour, becoming more adaptable, less judgmental and more skilled at changing their habitual approach to accommodate / embrace our cultural differences.

In one study, groups receiving global awareness training showed significant changes in behaviour compared to those not trained, especially in the skill areas of avoiding labelling of colleagues/clients based on culture; modifying the style of meetings, e-mails, and phone calls to match cultural expectations; and adjusting to how others build relationships. In fact, in this study of high-potential managers, 91—100% indicated that global awareness training:

Overall, 100% of the managers agreed and 29% strongly agreed that global awareness training made them more effective in their job.

The dimensions discussed here have a demonstrably large impact on every aspect of a business relationship, from how agreements are reached, to how and when actions are taken, to how to conduct ongoing communication.

Employees of companies doing international business can benefit from greater awareness of these dimensions, and from building skills that will help them create mutually satisfying business relationships regardless of where they are in the world.

Please complete this form to download Is Your Organisation Ready to Go Global? | 5 Cultural Dimensions that Must Be Managed to Ensure Global Effectiveness.

Please complete this form to download Is Your Organisation Ready to Go Global? | 5 Cultural Dimensions that Must Be Managed to Ensure Global Effectiveness.